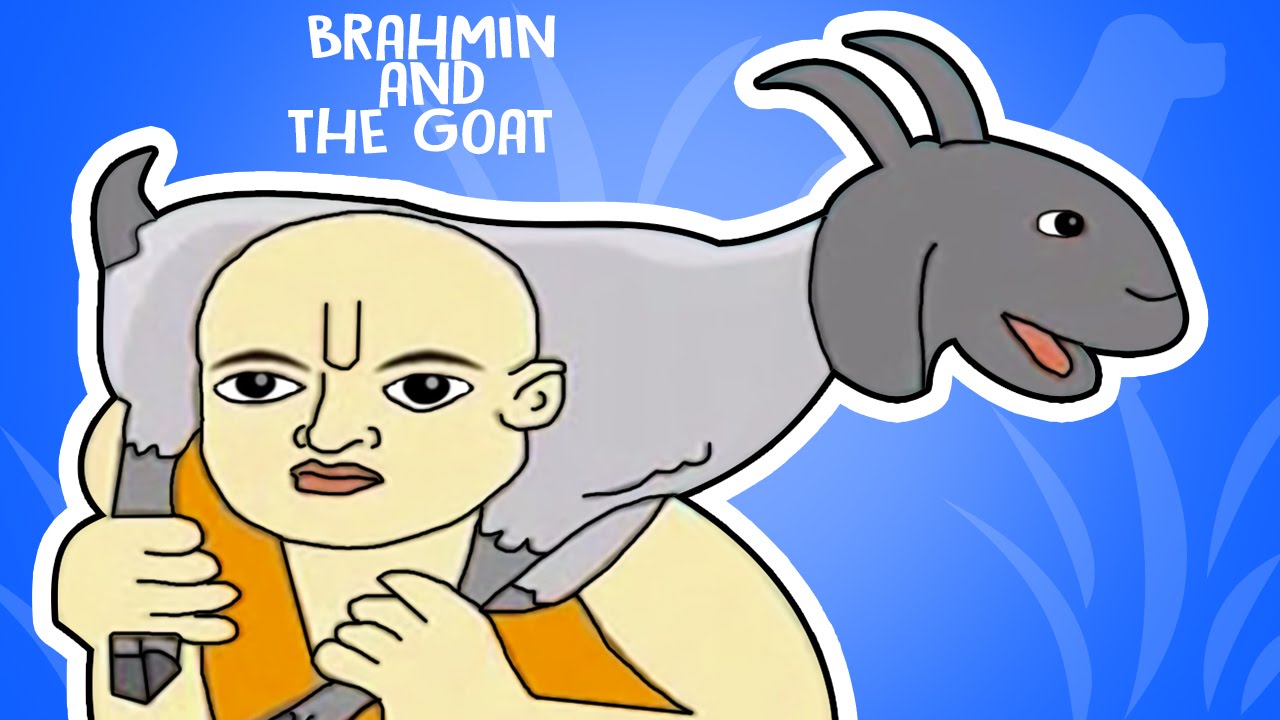 The Brahmin And His Goat

Once a brahmin (holy man) received a goat as a gift after performing a religious ceremony. The brahmin lifted the goat on his shoulders and left for his home. It so happened that three rogues happened to see the brahmin carrying the goat.

They were very hungry. Seeing the goat, the first rogue exclaimed, “Oh! That is a fat goat. We should get that goat”. “Yes, it would make for a very nice meal for all three of us”, said the second one.

“But how can we get the goat. The brahmin is carrying the goat on his shoulders. Am sure he won’t gift it to us”, said the third one.

“I know how to get that goat. I have a plan”, said the first rogue, “Listen to me”. He whispered the plan into the ears of the other two. They would fool the brahmin and get the goat for themselves.

They ducked behind the trees by the roadside and moved past the brahmin, all the while making sure the brahmin did not see them. A little later, one of the rogues approached the brahmin. “Oh! holy priest,” the first rogue said politely, “I see that you are carrying a dog on your shoulders. I fail to understand why a pious person like you would carry a dog on his shoulders”. “Have you no eyes?” snapped the brahmin, “Can’t you see it’s a goat and not a dog. I received it as a gift for performing a religious ceremony extraordinarily well.”

“Pardon me Sir, but I only say what I see with my eyes. I shall say no more”, said the first rogue.

“Clearly, being highly educated isn’t everything”, the rogue muttered before leaving, making sure that the brahmin heard him.

The brahmin continued on his path, cursing the man for his utter foolishness.

He had barely walked a hundred meters when the second rogue came up to him and said, “Respected Sir, where did you find a dead calf and why are you carrying it on your shoulders? Is it not disgraceful for a brahmin to carry a dead animal? ”

The brahmin lost his temper on hearing this. He shouted furiously at the second rogue, “What is happening to everyone? Are you also as blind as the other foolish man I met a while ago? This is no dead calf I am carrying. It is a goat that I received a little while ago.”

“Forgive me Sir. I just thought I should let you know what I see. It does not matter to me whether you carry a dead calf or a live goat. Do as you please”, he bowed to the brahmin and walked away.
The brahmin was a little puzzled now. He glanced at the animal to ensure that it was indeed a goat and continued with his journey.

Shortly, as planned, the third rogue appeared. Upon seeing the brahmin, he frowned and said, “Pardon me Sir, are you a real brahmin?”

“Yes, indeed I am. What sort of a question is that?” retorted the brahmin.

“Then, may I ask you how a holy man such as yourself, dares to carry a pig on his shoulders? Someone as holy as you should not even touch this animal, let alone carrying it on your shoulders.”

The brahmin became anxious. Every person that he had met on his way saw a different animal on his shoulders. The first person saw a dog, the second one a dead calf and now a pig.

“What if I am carrying a shape-shifting monster or a goblin who could change forms?”, thought the brahmin.

The brahmin’s face turned pale at the mere thought of carrying a monster on his shoulder all this while. Scared for his life, he immediately got rid of the goat and ran home as fast as he could. The rogue called out to his friends. They picked up the goat and left the place, all the while talking about the brahmin whom they fooled so easily.

Moral: All the bookish knowledge in the world is useless without common sense.

The Brahmin And His Goat