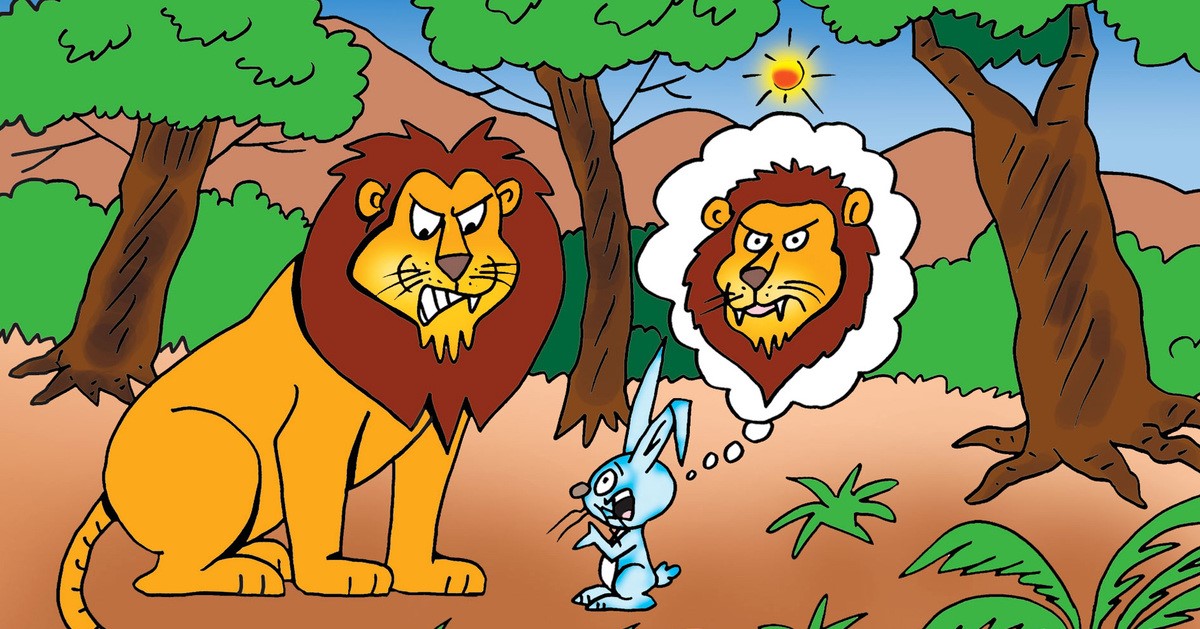 The Lion And The Hare

Once upon a time there was a beautiful jungle. There lived a very big lion. Being the king of the jungle, the lion called all the animals and ordered them, “Everyday one of you should come by yourself as my prey, otherwise i will destroy the whole jungle.”

The animals were too scared of the lion and agreed to obey his order. The animals planned that one from each group would go one by one. The lion was happy with his easy prey. Days went by. One day, it was the turn of the hare. A little hare voluntarily agreed to go to the lion’s cage.

“How dare you arrive so late?” he growled at the hare.

“I’m sorry, My Lord. I would have reached here on time. But I was delayed by this new lion in the jungle,” the hare said.

The lion was shocked, “I command you to tell me all about this lion.”

“This lion wanted to gobble me up. But I told him that I was already on my way to meet you. The lion laughed at me. He said that a real king hunts his prey, and that I shouldn’t bow to a weak lion like you. His words, my Lord, not mine!”

“How dare this lion insult me. Take me to him this instant,” the lion said angrily.

“My Lord, the other lion also wanted to meet you. He spared my life so that I could deliver his message to you. He says he is the new King of the jungle.”

“Did he say so? Lead me to that imposter.”

“But my Lord, I wouldn’t suggest going after him. He is strong, and he lives in a fortress.”

“Ha! I wouldn’t expect a puny hare to understand pride. No one in this jungle can challenge me and live. Just lead me to this fake king of the jungle.”

The hare took the lion to the other end of the jungle. A stone well stood in a clearing. “My Lord, the other lion lives inside that fort,” he whispered.

The lion climbed the wall of the well and looked down. There he saw the ‘other’ lion looking back at him. The foolish lion didn’t realize that he was staring at his own reflection. He gave a huge roar. The roar echoed in the walls of the well and sounded even louder.

The lion turned to the hare. “You are right. This fellow is very strong. His roar is mighty. But don’t worry, I will kill him in a jiffy.” Saying this, the lion jumped into the well. He hit his head at the well’s bottom and never came out.

All the animals hiding behind the bushes came out clapping. The hare gave them a bow.

Moral :  Intelligence always has an upper hand when compared to physical strength

The Lion And The Hare